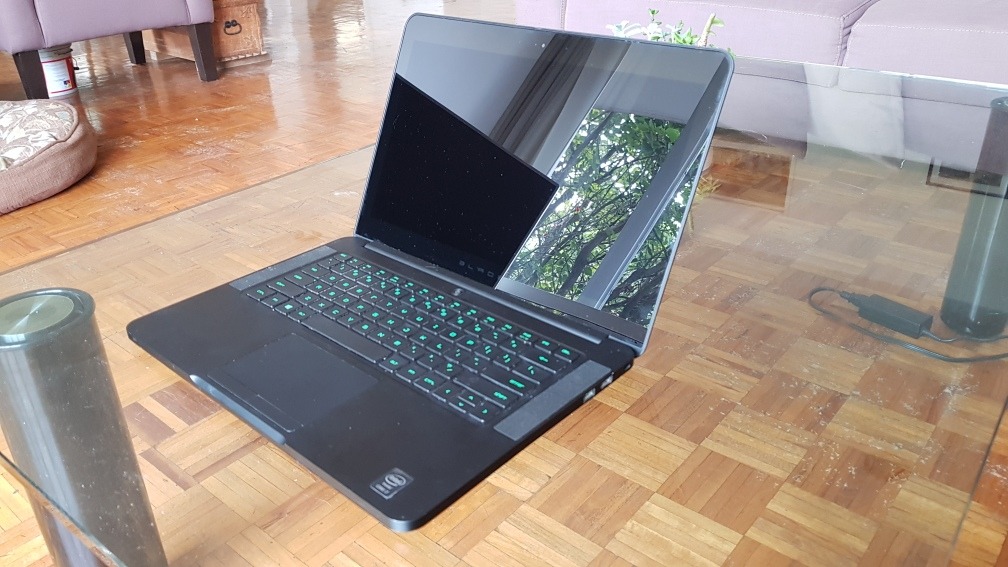 Login to submit a review! Look and feel We hate using the term, but we will anyway: That's a grossly overused word, sure, but if we ever really meant it, that time would be now. The Blade feels premium in a way that's difficult to quantify, but we're sure it has something to do with that sturdy shell and relatively thin profile.

There's no question in our mind, though, its inspiration, down to the minutiae, borrows heavily -- and we mean heavily -- from the inch MacBook Pro. Details like its latchless design, sunken chiclet keyboard, to the shape of its outer shell down and its identical hinge. But we're perfectly okay with that, as they've been remixed into something far more arresting. That luxurious experience begins not with the hardware, but the elaborate packaging.

To say we weren't expecting much would be an understatement -- can you remember Razer Blade 17" (2012) Dolby Home Theatre last time you unboxed a PC laptop? Not to mention those gorgeous asymmetrical cut-outs, giving way to a Razer-green layer beneath, subconsciously begging you to peel it away. Lifting off the top half reveals an interior dominated by the rather large laptop, which you'll conveniently lift out with a similarly hued green ribbon. Underneath, you'll find the usual suspects: So far so good.

That's it connectivity-wise, as on the right you'll find another exhaust identical in size and placement to its leftward cousin and a Kensington lock slot about half way down. It's around this time you realize the Blade is devoid of an optical drive, so those thinking about installing games the old-fashioned way better invest in an external unit or get cozy with a service like Valve's Steam or EA's Origin. Other exterior highlights worth mentioning are a backlit logo on the lid, which glows green, and an additional set of chrome-accented vents festooning the base.

Lift the lid and you'll see that sparse aesthetic extends onto the laptop's interior. Which, apart from the already mentioned backlit keyboard and LCD-stuffed trackpad, is home to a rather large power button, which Razer Blade 17" (2012) Dolby Home Theatre green when the laptop is powered on, and pulses when the machine's asleep. The only remaining features crammed onto the deck space are a speaker grille that runs the entire length of the hinge, and a chrome-ringed webcam, just north of the screen.

While Razer Blade 17" (2012) Dolby Home Theatre designed and well-built, unfortunately not all is perfect in the land of the Blade. There's one niggling flaw that taints the otherwise top-notch experience, and it has to do with difficulties in prying the latchless notebook open. Either the hinge isn't lubricated enough, or the front-portion of the system isn't privy to enough mass, but with the unit shut, attempts to lift the display are met with frustration, as its bottom read: You eventually adjust to opening it more slowly and with less force, or by holding the base while you attempt the maneuver -- neither of which, we think, are satisfactory options for a machine this expensive.

It's an unfortunate oversight or engineering compromise, perhaps and our only real gripe with the hardware, though unfortunately it rears its head every time you open it.

Keyboard and touchpad While the rest of the Blade isn't functionally different from other laptops, its party piece, the LCD-toting touchpad and the ten configurable buttons Razer Blade 17" (2012) Dolby Home Theatre above it, are certainly novel. We'll begin with the mousing device. As best as we can tell, its top-most layer houses a rather thick layer of tempered plastic, which unfortunately introduces more friction than we'd like, in addition to the fact that it just doesn't feel as premium as the rest of the laptop.

Although in fairness, with time and of course, grease swipes do become easier. But for what it lacks in feel, the pad makes up for in accuracy: Like all PC scrolling, it's linear -- there isn't any spiffy physics-induced acceleration of content Razer Blade 17" (2012) Dolby Home Theatre -- but the Synaptics pad was more than responsive otherwise. Multitouch also makes an appearance, naturally making that previous two-finger scrolling endeavor possible, as well as a few others: Those additional gestures weren't nearly as polished, but seeing as they're less generally useful, we didn't mind much, except for the last, which you'll have to be rather deliberate to actuate as you swap between pre-programmed sets of icons in one mode of trackpad.